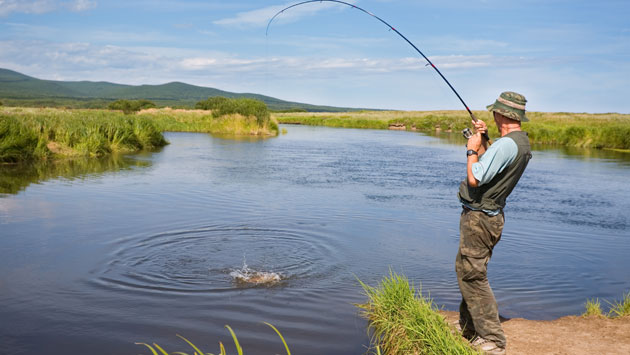 Blessed with a coastline almost 3 000 kilometres long, and numerous dams, lakes, rivers and streams, South Africa has plenty to offer the fishing enthusiast. From game fish in two oceans to trout in mountain streams, there is something to challenge and entertain everyone.

Many of South Africa's prime fishing spots offer not only good fishing, but also include some of the most beautiful places in a country blessed by Mother Nature.

Deep sea charters are available from ports along the coastline, which is shared by both the Indian and Atlantic Oceans, as well as the cold Benguela and warm Agulhas currents, bringing with them a wide variety of species.

Almost 15 percent of all known coastal marine species are found on the South African coast.

The gentle art of fly fishing is popular in South Africa, with three areas especially recognised for their bountiful offerings: the KwaZulu-Natal Midlands, Mpumulanga province, and the Eastern Cape. All three regions boast sizeable mountain ranges; it is in their mountain streams that trout flourish.

Some of these areas can be accessed only with 4x4 vehicles. The up-side of this is that they retain their natural beauty, being somewhat isolated.

For some, bass fishing is the way to go. The bass is an intelligent and thus challenging fish, while being hardy too. This makes it a very adaptable fish, to be found far and wide, and partial to a wide variety of bait.

Carp fishing also has its supporters. Like bass, carp were originally imported into South Africa, and offer an excellent challenge. They also grow to some pretty amazing sizes.

Fishing along the Western Cape Coast offers many fishing locations :

Just east of Cape Agulhas, Africa's southernmost point, lies the small coastal town of Struisbaai, arguably the capital of near-shore boat angling in the Western Cape, served by a small but functional harbour.

Frequented in season by many recreational ski-boat anglers, the huge shelf of the Agulhas Bank supports a wide variety of bottom-feeding as well as pelagic species, desirable both as sport and food fish.

Another favourite species is the kabeljou, or "kob", a fish similar to the American red drum. Favouring reefs surrounded by sand, this specie averages a similar size to the yellowtail.

A number of bottom feeding redfish species also occur in this area. The largest is the famous red steenbras which attains 150 lb but is commonly around 30 lb.

This area has much to offer the keen angler. There are many spots, rock and surf, close to each other, so a fishing getaway will have many opportunities, both for a change of scene, and “luck”.

The most common fish found in this area are Steenbras (throughout the year) and kabeljou (in the summer,) with galjoen, elf and snoek in season. A highlight for anglers is the crayfish/rock lobster season in summer (usually November to January) when these delicacies are caught during the limited and strictly-monitored period.

Fly Fishing In The Western Cape

Many rivers in the Western Cape were stocked with rainbow or brown trout in the late 1800s and early 1900s.  Not all of these efforts were successful and even some of the successful ones have been degraded over time through agricultural or urban development.  Nevertheless, a few have survived, and even flourished, and left us with a legacy of some of the best freestone river fishing in the country.

The waters of these rivers are stained light amber by the tannins in the fynbos and the wild trout populations that occupy them are very hardy.  Lower down, the rivers become unsuited to trout, so almost all the fishing waters are higher up in the mountains.  Here the rivers are small; in paces they can be as narrow as an easy jump.  However, they are rocky and can be tricky to navigate.  Most anglers end up doing the “slippery rock dance” at least once a day, and often end up taking unplanned swims.  In high summer this is no big deal, but in the cooler months it can be rather unpleasant.  For this reason, non-slip wading boots are strongly recommended.  Bear in mind that you will be spending almost the entire day in the water – there is no bank fishing here.

The Fish Species of South Africa

220 freshwater fishes occur in South Africa, of which 21 are threatened. There are more than 2 000 marine fish species, for which no information is available about threatened species. Many fish species are of economic importance. Most of the small barbels are valuable aquarium species, while the majority of the larger species are important angling species. The Tigerfish (Hydrocynusvittatus) is well known for the vigorous fight which it gives to the angler.